By Mercy FlightsAugust 6, 2020No Comments

The Mercy Flights Board of Directors unanimously voted to formally name the company’s boardroom “Burrill Boardroom” in July 2020. The naming honors the Burrill family’s 70 plus years of service and devotion to Mercy Flights, which represents the single largest combined contribution to the company since its founding by George Milligan.

“Countless patients, staff, and entire communities have benefited from the Burrills’ commitment to supporting Mercy Flights’ mission to provide the region with the highest quality access to healthcare,” said Pirkko Terao, Mercy Flights board member and granddaughter of George Milligan. 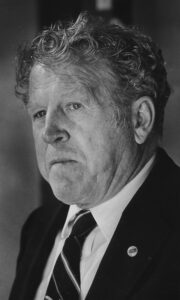 The family legacy began with Eugene Burrill, one of the first champions to join George Milligan in his quest to save lives and improve health care for friends and neighbors in Oregon’s rural Southern Oregon communities. A skilled pilot and dedicated volunteer, Eugene flew hundreds of missions and rescue flights into small and remote communities on behalf of Mercy Flights. He was a passionate community advocate, who helped Milligan garner support from local leaders as the organization was founded in 1949. In 1950, Eugene joined the Mercy Flights board of directors and served as a member into the 1980’s. As owner of a local lumber company, he donated materials to build the first Mercy Flights hanger. Eugene and his wife, Gladys, lived in Prospect and when Medford was fogged in, they welcomed and greeted Mercy Flights planes on the Prospect Airstrip. A licensed pilot herself, Gladys stepped in to the second seat to fly as co-pilot on missions when called upon. Eugene F. Burrill Lumber Company also bought Iron Annie, a military surplus C-45 Twin Beechcraft, for Mercy Flights. The plane transported 1,150 patients until she was retired and donated to the Museum of Flight in Seattle, where she now hangs on display at the South end of the building. 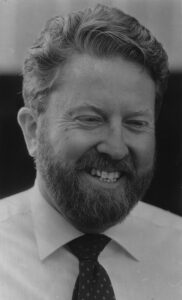 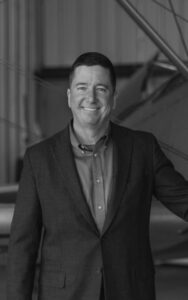 businessman and community leader, Mike Jr. also brought his experience as a private pilot to the organization. He went from board member, to treasurer to board chair in 2013; a position he held through 2019. During Mike’s tenure, Mercy Flights grew significantly with an updated fleet of ambulances and three new aircraft; two fixed wing and one helicopter. In 2020, Mike Jr. stepped down from the board to serve as the interim CEO for six months. He was appointed as a board director emeritus in July 2020.

“It’s been incredible to watch three generations of Burrills build upon each other’s work and dedication to Mercy Flights,” said Mercy Flights board member Ed Helman who has served on the board with all three of the Burrills. “Our organization wouldn’t be where it is today without the Burrill boys, all of whom are astute business men and aviation enthusiasts who are passionate about Mercy Flights’ service to our communities.”

“Three generations of Burrill’s have stepped forward as champions of this organization,” said DiRienzo. “We are grateful that Mike Jr. was able to lead us through our recent CEO transition and that he continues to serve as a board director emeritus during our upcoming strategic planning process. Our goal is to re-elect him to the Board of Directors in 2021, when he becomes eligible for a new term.”